Going beyond the emergency

During post-emergency phases, National Society teams supported by PIROI coordinate and participate in the rehabilitation and reconstruction of infrastructure and livelihoods. These activities are often accompanied by disaster risk reduction measures through adapting infrastructure and raising public awareness of risks. 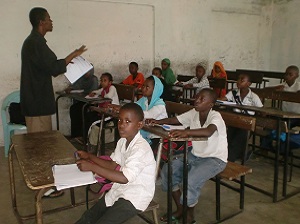 Implemented by the Comorian Red Crescent via FRC-PIROI, this pilot project ran from 2013 to 2014.

The first half of 2013 was the initial project phase, during which teachers – supervised by ten CRCo facilitators – educated more than 2,000 children on the largest of the nation’s three islands. The second phase covered the whole country with the help of 50 facilitators. During the entire project period this disaster risk awareness-building activity reached 5,500 children. The educational material distributed helps hazards to be identified, situations of vulnerability to be anticipated, and preventive attitudes to be adopted.

“Shababi Ka Tayari” is currently on standby, waiting for a budget in order to resume in schools.

The project was supported by the Comorian Ministry of Education and its partners.

The French Red Cross is helping victims of the Horn of Africa food crisis alongside Sodiaal and Candia. As part of a sustainable food security project, four goals were established to help Maasai agro-pastoral communities in Northern Tanzania:

To ensure successful implementation of the project PIROI has provided technical support to the Tanzanian Red Cross throughout activity development.

Following Cyclone Bingiza in February 2011, flooding and poor access to drinking water led to a risk of waterborne diseases for populations in the North Mananara District (Analanjirofo region). In view of this situation the Malagasy Red Cross, supported by PIROI, provided assistance by rehabilitating water points and promoting good hygiene practices. Improving access to water and sanitation, as well as promoting hygiene, encourages a change in the population’s behaviour and contributes to improving the latter’s health. In addition the project highlighted community group mobilisation using participatory methodology, respecting local context and the involvement of key members of the local community.