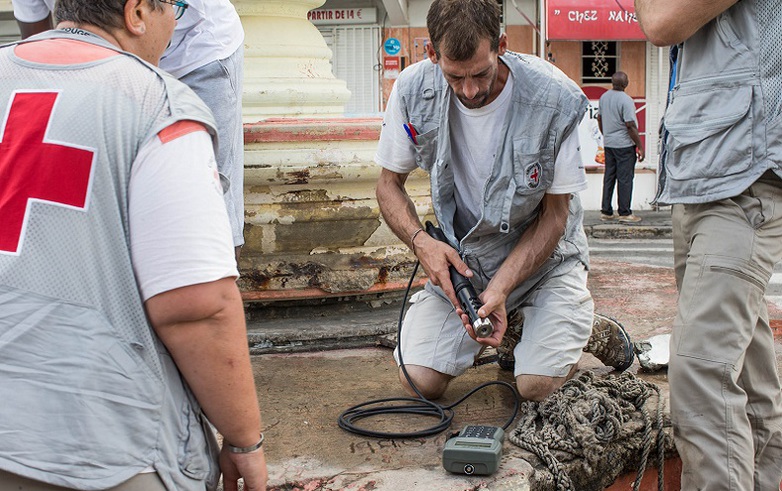 The Caribbean is experiencing an historically intense cyclone season. Hurricanes Irma (Category 4) and Maria (Category 5) have left a heavy toll in their wake. The French Red Cross was on alert as soon as these destructive natural hazards were reported to have hit, and quickly responded on site to help those affected.

On 6th September Irma struck the two French islands of Saint-Martin and Saint-Barthélemy with peak wind speeds of more than 300 km/h as well as heavy rain. At Saint-Barthélemy 70% of infrastructure was damaged when Irma made landfall. At Saint-Martin, almost 90% of buildings have been impacted, 25% of houses destroyed, and more than 1,200 people have been affected and are in a precarious situation.

Twenty days after this extremely devastating hurricane swept through, humanitarian aid has been organised locally. The response from the French Red Cross (FRC) has resulted in twelve drinking water reservoirs being installed in Saint-Martin, as well as enabling the distribution of water, hygiene kits, and emergency shelters at six points on the island. FRC team members have also organised regular patrols to reach out and help those who are most vulnerable, providing them with the assistance they need. Today, although the island is still severely affected, it is slowly recovering from the disaster. Businesses are gradually resuming operations, telephone services and some water points have been restored, and 60% of the electricity network has been re-established.

For more information (in French): http://www.croix-rouge.fr/Actualite/Ouragan-Irma2/L-aide-humanitaire-s-organise-sur-Saint-Martin-2147

A worrying situation in Dominica

Located 50km from Guadeloupe, this independent nation was successively hit by hurricanes Irma and Maria. The FRC reports that 57,000 people (almost 80% of the population) were affected, and 80% of the island’s infrastructure is said to be damaged (including 30% of houses destroyed).
In view of this situation the International Federation of Red Cross and Red Crescent Societies (IFRC) has deployed large numbers of emergency response team members. The FRC is particularly active through its Regional Intervention Platform for the Americas and the Caribbean (PIRAC), which will thus be able to provide humanitarian supplies from its warehouses, and transport equipment and human resources as required. PIROI, PIRAC’s counterpart platform in the Indian Ocean based in Reunion Island, has expressed its solidarity, and on 26th September sent two logistics officers to help with operations.

For more information (in French): http://www.croix-rouge.fr/Actualite/Ouragan-Irma2/Saint-Martin-reprend-vie-pas-a-pas-2154

[(To help with French Red Cross efforts you can make a donation at: https://soutenir.croix-rouge.fr/ouragan-irma)]