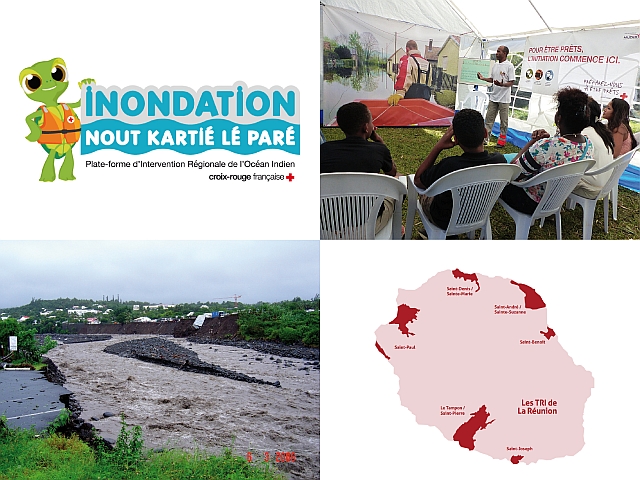 Flooding is one of the most frequent major natural hazards in Reunion, a territory which holds several world records for precipitation. Whether caused by cyclones or storms, periods of heavy rain can be of an exceptional scale, due to the island’s steep slopes and risks of erosion. One in four members of the island’s population lives in a potentially flood-prone zone and six high-risk areas (territoires à risque important :TRI) have been identified. It therefore appears essential to develop a culture of risk among residents of these zones, enabling them to become aware of their vulnerability and be better prepared for such hazards.

With the aim of mobilising all the actors concerned around this objective and reinforcing the resilience of the territories directly exposed to these risks, the French Ministry of Ecology and Sustainable Development has decided to support the local authorities involved in their efforts to promote innovative information and awareness campaigns that will mobilise the population, so that each person may take the appropriate actions in the event of a flood warning. Launched on 15th May 2017, the awareness program entitled ‘Inondation, Nout kartié lé paré !’ (Our neighbourhood is prepared for floods !) will be organised in the six high-risk areas: Saint-Denis, Sainte-Suzanne, Saint-Benoit, Saint-Paul, Le Tampon and Saint-Joseph.

The Department of the Environment, Planning and Housing in Reunion (DEAL), as well as the town councils concerned, have decided to take advantage of PIROI’s expertise and have asked the latter to pilot the project, in the context of its disaster risk reduction programme. Over 10 months, PIROI will contribute to developing the awareness of the actors working in the field of disaster management and encouraging the populations concerned to adopt the appropriate behaviour when faced with risk of flooding, in preparation for the coming cyclone season.

In order to do so, training sessions on the topic of flood risk will be organised for the intention of the populations and the players working in the field of prevention (council workers, teachers etc.). The project also includes awareness activities in schools, individual support for inhabitants of vulnerable neighbourhoods, interactive awareness-raising workshops, as well as family safety projects, specifically aimed at flood risk.

The first stage of the project, the ‘flowing water workshop’, to be held in August 2017, aims to develop the awareness of employees of the town council of Saint Denis, as well as the inhabitants of Ilet Coco and Ilet Quinquina, concerning the measures to be taken and the appropriate behaviour in the event of rising water levels.