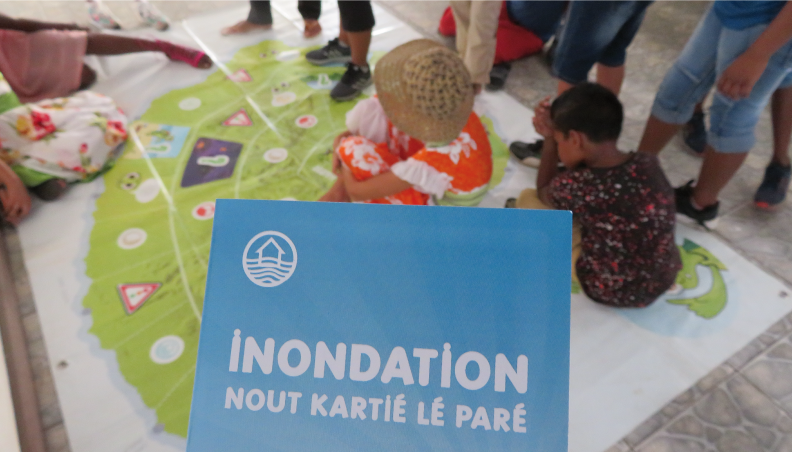 Launched in May 2017, the flooding preparedness programme ‘Our neighbourhood’s ready!’ came to an end on 14 March 2018.

During the 10 months it was active, PIROI and its partners focused their efforts on increasing the resilience of the most flood-prone residents of the six Major Flood Risk Areas of Reunion Island: Saint-Denis (Îlet Quinquina and the locality of La Colline), Sainte-Suzanne (Village Desprez and La Marine neighbourhoods), Saint-Benoit (Îlet Coco), Saint-Paul (Quartier Jacquot), Le Tampon (Bras-Creux neighbourhood), and Saint-Joseph (town centre).

This initiative aims to improve community services’ risk awareness and to prepare populations to adopt the right behaviour in the face of flood risk, and raised long-term awareness among more than 860 people.

The following is a brief 5-point overview of the programme’s highlights:

The first of its kind in Reunion, the course was designed to inform both vulnerable local populations and professionals – such as municipal employees and teachers who have a key role to play in risk prevention – about early awareness of risks and the means to protect themselves, and literally immerses participants in a realistic flood simulation in a safe aquatic environment.

The ‘Nout kartié lé paré!’ flood preparedness project thus enabled Reunion Island’s municipalities to work with PIROI to share preventive information with those who are vulnerable to climate-related hazards. It is a highly promising initiative that deserves to be renewed.

*A serious game is an activity that combines ‘serious’ intent – educational and informative for example – with entertaining elements.