Ms Croze, a teacher at the children’s hospital school, contacted PIROI in May to request an activity for her classes. The intervention by the Paré pas Paré project team concluded a volcano-themed educational project which the children had been working on for several months. Following on from pupils’ studies of volcano formation and structure, the Red Cross volunteers highlighted the risks posed by volcanoes and the safety precautions to be observed. 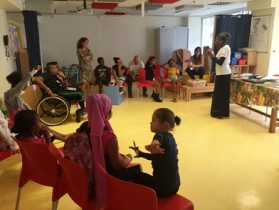 A total of fifteen pupils aged 8 to 17 participated in the activity. Following an initial awareness-raising activity about volcanic risk, the pupils were then able to test their knowledge in a big, fun, participative quiz specially created for the occasion by the Paré pas Paré project team.
During the activities each pupil received a booklet from the ‘volcano’ module of the Paré pas Paré programme and an ‘unbeatable Paré pas Paré’ game, as well as Paré pas Paré mascot ‘Timoun the tortoise’ magnets and pens. To promote awareness raising, volunteers also gave the school happy families card games and a ‘Local risks’ board game about the natural hazards which occur in Reunion Island.

By the end of the intervention everyone was delighted, and both teachers and Paré pas Paré volunteers arranged a visit next year to implement new modules covering the other natural risks present in Reunion Island.