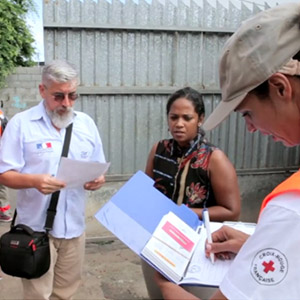 Since the beginning of 2018 Reunion has experienced an escalating dengue epidemic, and according to the Regional Public Health Authority as of 22 May that year 3,416 cases had already been confirmed. The outbreak continues to progress mainly in the west and south, and some cases have been identified in other parts of the island.

Response in the most dengue-affected districts:

At the request of the Regional Public Health Authority (ARS), the French Red Cross has joined the fight by drawing on its network of volunteers to carry out door-to-door campaigns in areas such as Saint Paul where the virus is actively spreading. These initiatives are aimed at raising inhabitants’ awareness about the transmission of dengue by mosquitoes, means of protection against mosquito bites, and elimination of larval breeding sites around homes.

The Red Cross has enlisted 20 or so volunteers from all over the island for this purpose. After receiving training from the ARS about the message to be delivered to the local community, volunteers have been visiting the most affected neighbourhoods.

In order to engage the general public in mosquito control, the natural hazards awareness-raising project Paré pas Paré has broadened its scope by running stands where the game ‘Buzz la dengue’ (‘A Buzz about Dengue’) can be played. This is a strategy game where two teams compete against each other (mosquitoes vs humans). The goal is to create awareness about the impacts of dengue disease and learn how to reduce the risk of infection.